Kokoro Do Martial Arts Mentoring, in cooperation with Pushingforpeace, is pleased to invite you to a one-time advanced training in Vienna: 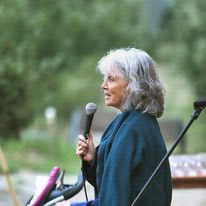 Grandmaster Marilyn Cooper from CA/USA has been training Kung Fu since the mid-1960s and has been running her own school for Chinese martial arts since 1980 with a focus on promoting health and preventing violence. Her teachers were Sifu Kuo Lien Ying and Grandmaster Peter Kwok. After the tragic child killings at Columbine High School in 1999, she began teaching Taiji for Kids at her youngest child's school. After 15 years of Taiji movement work with children and young people, Cooper developed a simplified movement concept from 9 coordinated solo, partner and group games based on her extensive knowledge and practice in Northern Shaolin, Taijiquan, Qigong and Bagua, and called it “Tai Chi Peace games".

The games are designed with the intention of allowing practitioners to experience peaceful connection with others while promoting relaxation and balance. In order to spread her concept, Cooper founded the NGO “pushing for peace". The "Peace Games" were refined and spread worldwide: wherever there is a need for community and mental health promotion. The games can also be done with and for differntly-abled groups and individuals. 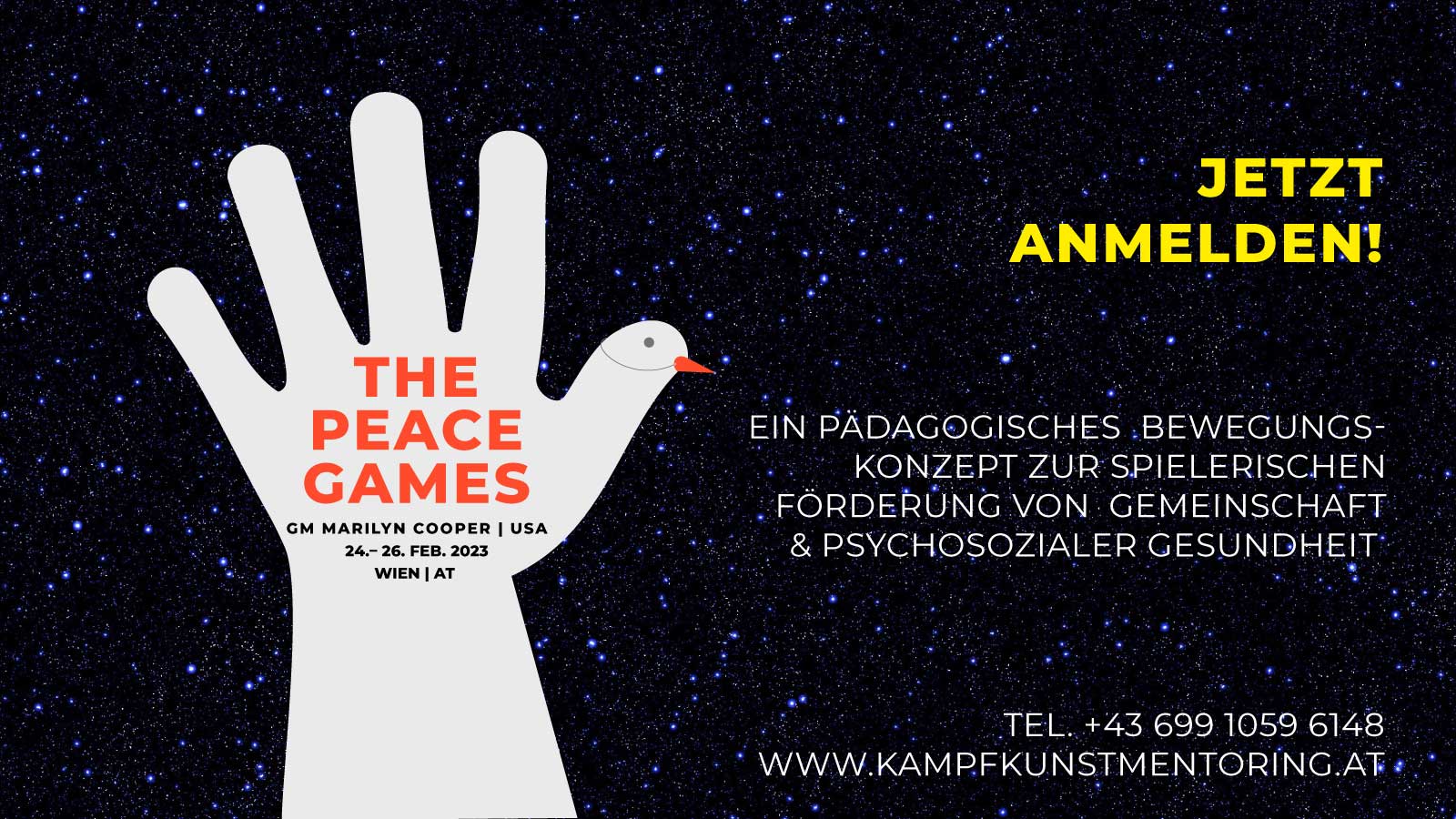 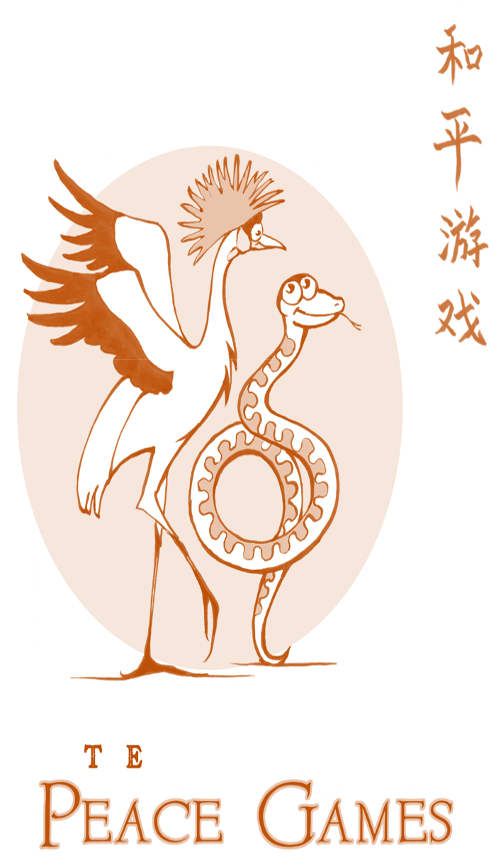 The Peace Games can be used at work, at school, in refugee work... basically anywhere... basically wherever people congregate and want to generate empathy, creativity and positive life-force energy flow.

About THE PEACE GAMES and T'ai Chi Ch'uan by Marilyn Cooper

The Peace Games are designed to reduce violence and increase mental and physical health. Playing these fun and easy games makes people feel more grounded, centered, relaxed, natural, lively and connected to others. They are based on Chinese Kung Fu – specifically T'ai Chi Ch'uan, Taoist meditation or Qigong, Northern Shaolin and Bagua.

I created the Peace Games in response to the Columbine High School massacre as a way to prevent youth violence. They reduce stress for children as young as two (in the adapted program) and adults at any age. The games can be played alone, by as few as two people, and have been played in groups of over seventy-five people at once. A trained guide (called a “Peace Games Ambassador”) can lead the group through a transformative experience with these simple, non-strenuous activities.
The Peace Games have been presented to groups throughout the USA, Europe and Asia. They are non-invasive, like tag or hide and seek, but instead of stimulating an urge to beat an opponent or to score more points, the Peace Games deliver subliminal messages to the minds, bodies and spirits of the players.
Peace Games can be played by everyone - young, old, athletic and differently-abled. Peace Games Ambassadors who are well-trained in Kung Fu or related arts are best qualified to conduct a Peace Games session. However, absolutely anyone can follow the instructions on their own and will reap the rewards from an hour well-spent.

This nine game series is best done in order. Each game stimulates a feeling that gives an understanding for the next game. They also can be used a la carte as the need arises for stress relief. The games start simply, building up in intensity and culminating in a whole group experience at the end. These games give us a glimpse into the infinite. They help us realize that there are higher levels of consciousness, beyond words, readily available to us all.

T'ai Chi Ch'uan is the most enigmatic of all the Kung Fu systems. The literal meaning is “Grand Ultimate,” indicating that it is at the pinnacle of Chinese culture. T'ai Chi Ch'uan itself is a synthesis of Qigong and Shaolin, of knowledge and wisdom, of fighting and healing.

The main form that remains the centerpiece of all my Kung Fu knowledge and teaching, contains the sixty-four movement form named Guang Ping Yang by YC Chiang in Berkeley, California in the 1970s, and called Original T'ai Chi by Kuo Lien Ying Movements from all of the other systems - Shaolin, Xing Yi and Bagua, but they are done with a T'ai Chi flavor, slowly and thoughtfully. This is why I often call the Peace Games “The T'ai Chi Peace Games.”
T'ai Chi is the most deeply philosophical system of Kung Fu. T'ai Chi Ch'uan moves from posture to posture like a river, flowing over obstacles — a constant flow of changes. The positions in-between each picture-perfect posture are as important as the completed movements. Practicing T'ai Chi Ch'uan form exemplifies the notion that — “Life is a journey, not a destination.”

Imagine pulling away from your motif, or point of concentration, to get a larger view while still being in high def. I have experienced this during meditation, while dreaming, and while pushing hands. Another way to describe it is as concentric circles of expanding awareness. The experience is like being inside and outside of yourself at the same time. It reminds me of painting a self-portrait while observing myself in the mirror, observing the image inside the mirror, the space around the mirror, the space behind me reflected in the mirror, and the painting of the in the painting as it's emerging. You can choose at which point to freeze time.

T'ai Chi aligns itself with natural law, and the same laws that prevail in physics with regard to gravity, rotation, motion and stillness. Psychology, physiology, aesthetics, and spirituality all come into play in T'ai Chi. Tai Chi does not rely on pure strength, but rather awareness, grace and sensitivity. Women can seldom match men in strength, but we excel in these other areas. T'ai Chi uses heightened perception, calmness and self control to counter brute force.
The primary distinction between the practice of T'ai Chi Ch'uan and all other martial arts styles is the self-control and constant mindful awareness created by the slowness of execution. Anyone adept at T'ai Chi can deflect most aggressive attacks without feeling or causing pain and suffering because T'ai Chi practice rewires our reactions to stress. Our reptilian brains are bypassed and instead we are reprogrammed to respond with a balanced integration of compassion and aggression. It is the expression of reason over reaction, and mind over matter. It is the co-mingling of reaction and response, the integration of our parasympathetic and sympathetic impulses.

T'ai Chi, unlike sports or pure conditioning, does not exploit energy with the goal of winning, running faster, or scoring points. T'ai Chi improves one's whole state of being by “Cultivating Qi,” simultaneously providing youthful energy, a profound philosophy, a health care plan, a method of poetic self-expression and a system of energetic rather than verbal, emotional communication. A step up on the evolutionary ladder of humankind, T'ai Chi represents our progress from animalistic primates who grab, push and shove, or cower, shrink and run into balanced, civilized, enlightened people who can take care of themselves and others well into old age

Understanding T'ai Chi philosophy helps people bond with others on this path. The intense bonding, the sense of community and friendship with one's sisters and brothers is another one of the rich rewards from practicing T'ai Chi, especially if you help each other improve by playing push hands.
The far reaching and overarching goals of T'ai Chi make the patience required during the learning process a relatively small sacrifice. The cognitive sensing from slowing down even while in the learning phase provides the immediate reward of Qi flow, of feeling more centered and balanced, and over time, the higher level of skill that is attained from long-term training.
Practitioners enjoy richer, wiser lives from taking the time to learn and practice T'ai Chi. The ease of execution comes from focusing on where you are coming from to get to where you are going, not from trying to be where you are not. You always have to be firmly sunk and rooted on the back leg to achieve the light step on the other leg to advance to the next movement. You can never get ahead of yourself, literally and figuratively.
Ironically, you won't get where you want to be - healthy, calm and youthful - by straining to be as strong as you think you should be or struggling to feel as young as you once did. You will achieve this by practicing something that is designed specifically to produce longevity and vitality – T'ai Chi.